Australia’s market leader in trailer, caravan and motorhome technology, AL-KO International Pty Ltd, has been named as the Caravan Industry Association of Victoria (CTIAV) Manufacturer of the Year.

The announcement was made at the prestigious CTIAV Hall of Fame Industry Awards on 8th July at Crown Palladium, with AL-KO jointly named as manufacturer of the year along with caravan manufacturer New Age Caravans. AL-KO is the first component manufacturer to receive the Award for Manufacturer of the Year, making the company’s success all the more significant.

With nominations assessed by three independent judges, the award recognises manufacturers for their outstanding business performance throughout the past 12 months, and takes into account a wide range of criteria including manufacturing innovation, business growth achievements, workplace health & safety initiatives and environmental & community support.

Reflecting on winning the award, AL-KO Managing Director Peter Mannfolk said; “we are honoured by this recognition of AL-KO’s role as a supplier of world class components, and also as a trusted partner to the industry in developing world leading technology”. 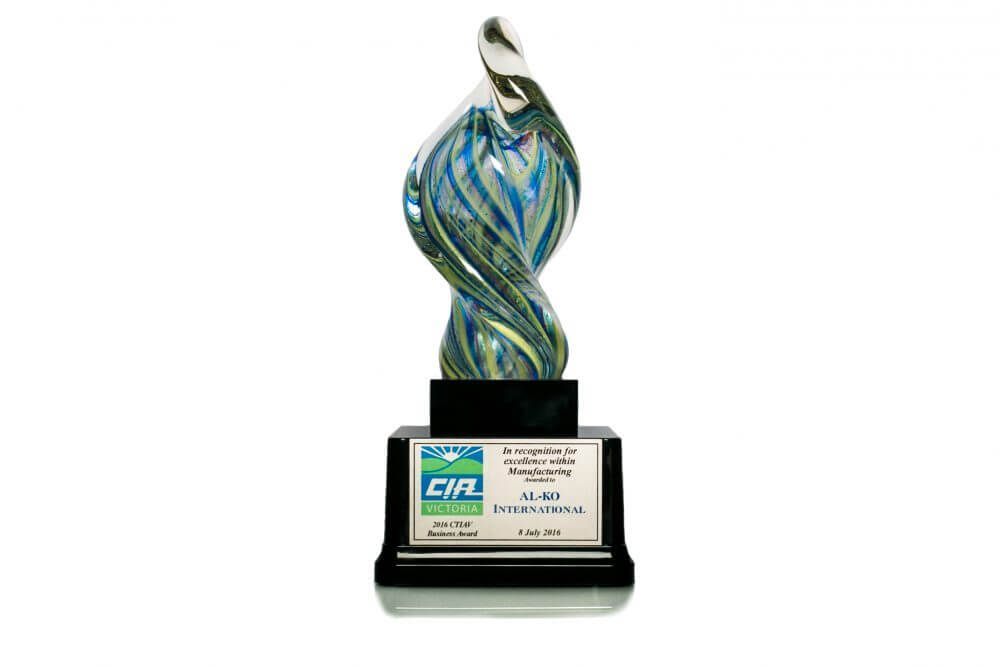 The past 12 months have been particularly successful for AL-KO in Australia and New Zealand. In addition to recent product developments such as AL-KO Electronic Stability Control (ESC), in late 2015 AL-KO invested in additional state of the art robotics technology to facilitate the launch of the new AL-KO Enduro Independent Trailing Arm Suspension and ensure quality and consistency in manufacture.

Winning the CTIAV Manufacturer of the Year award confirms AL-KO’s position as Australia’s leading manufacturer of components for trailer, caravan and motorhome applications. The award comes not long after AL-KO’s induction into the elite Victorian Manufacturing Hall of Fame in 2013, an initiative of the Victorian Government that recognises sustained contribution to manufacturing excellence in Victoria.

Reflecting on what the Award means for AL-KO, Mr Mannfolk stated ‘this award proves that there has never been a more exciting time to be part of the AL-KO team. We are looking forward to continuing to work with the industry to drive excellence in manufacturing and product innovation right here in Australia’.

Completing a highly successful night for AL-KO, Company Director Sven Mannfolk was also recognised for his significant contribution to the industry in taking out the Charlie Tebb Service to Industry Award for 2016.

As Managing Director of AL-KO International Pty Ltd from 1989 until this year, Mr Mannfolk has overseen a period of rapid ongoing growth of the company in Australia and New Zealand driven by product range expansion, innovation and a commitment to quality.

For general questions or quotations please click the link below then complete the form on the next page.
> Contact Us

DexKo Global Inc. is expanding its Australian operations, announcing it has signed an agreement to acquire Melbourne Trailer and Caravan Supplies (MTCS).

Anticipate. Assess. Respond. The Dexter TOW ASSIST does it faster than you can.

AL-KO has released a service campaign to inspect and rectify possible incorrect fitment of brake calipers to some caravans.

Sign up to our newsletter to receive hints, tips and vip only special offers.